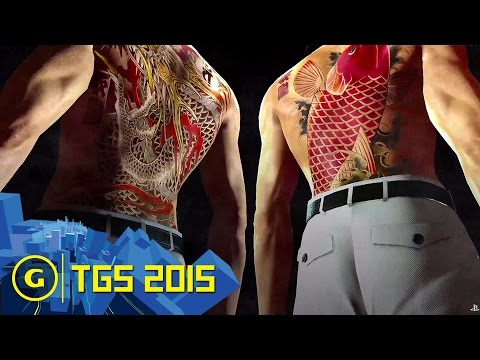 Yakuza Kiwami is an action-adventure game for various platforms such as PC, PlayStation 3 and PlayStation 4, developed and published by SEGA. It is a remake of 2005 game Yakuza. The game tells the story of Kazuma Kiryu, member of the Yakuza who returns from prison after taking the blame for the murder of Yakuza boss committed by his friend, Akira Nishikiyama. Yakuza Kiwami emphasizes combat mechanics and exploration of the open-world environment, filled to the brim with side activities and mini-games. Windows version was released on February, 2019.GameplayLike the original game,Yakuza Kiwamiputs emphasis on three gameplay aspects: combat, exploration and participating in the optional activities and mini-games. Combat in the remake is similar to the one deployed in the original Yakuza game. Kiryu has at his disposal four fighting styles. Alongside Kiryu’s trademark Dragon style there are: Brawler style, which balances speed and strength; Beast style is strong but slow; and Rush style, which allows throwing quick combos, but they deal little damage. Players can switch between the four styles on the fly and mix attacks into various combinations. Kiryu is also able to use various weapons, from bats and knives, staffs and swords. These have limited durability and will break after extended use. Firearms are also available in the game and can be used as melee weapons.In Yakuza Kiwami there are three types of enemy encounters. Enemies who travel in groups may notice Kiryu and call him out for a fight. While walking around the streets, Kiryu might also hear someone who is calling for help. Rushing to their aid will cause a fight to break out. Another type of combat encounter is triggered when Kiryu bumps into a passerby. They will then proceed to attack the protagonist, offended by his rudeness. Fighting enemies yield money and experience points which can be spent at upgrading Kiryu’s abilities and adding more HP.Exploration and side quests are tied together in Yakuza Kiwami. While traveling through the Kamurocho, a district of Tokyo based on the real-life district of Kabukichō, Kiryu will encounter various people, to whom he can offer his services. These side quests are rewarded similarly to fighting, with money and experience points. Earned money can be spent on mini-games available in Yakuza Kiwami. These include bowling, darts, mahjong and shogi, as well as various arcade games available at clubs and in various other locations of Kamurocho.A completely new gameplay mechanic introduced in game is Majima Everywhere. While out in the streets, during mini-games or special challenges, the player may encounter a rival character of Goro Majima, who will challenge Kiryu to a fight. Defeating Majima in different circumstances will increase the player’s rank in the Majima Everywhere system, and unlock new skills for the Dragon style.Story modeKazuma Kiryu is a young member of the Yakuza’s Tojo Clan. When Kiryu’s childhood friend Yumi is raped by Tojo Clan boss, Dojima, Kiryu’s friend Akira Nishiyama murders him, Kazuma takes the fall for Nishiyama and is sent to prison. After his release, his world is changed. Tojo Clan is now led by Nishiyama, Yumi has gone missing and 10 billion yen stolen from the Tojo are hidden somewhere in Tokyo. Clans begin an all-out war for the money, and Kiryu, expelled from Tojo ranks, must take part in the search to find out what happened to Yumi.ReceptionYakuza Kiwami (PC) received positive reviews from critic and fans alike, with special praise given for the combat mechanics and the story. Together with Shenmue III, the game was a sign of the resurgence of classic yakuza-triad Asian gangster video games with open-world and multiple side-quests and actions. Players and gaming experts praised the remake of the original Yakuza game for its story and gameplay and the game was nominated for various best game awards.