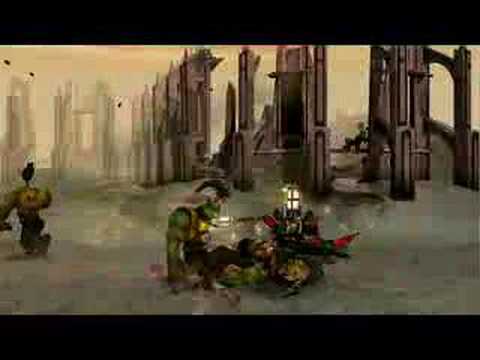 The third and final expansion to the genre-defining and critically-acclaimed RTS, Dawn of War. In Soulstorm, two new armies are introduced – Sisters of Battle and Dark Eldar - raising the total number of playable armies to nine. The revolutionary meta-game that was first introduced in Dark Crusade is further expanded to an interplanetary scale, allowing players to battle across the star system. Sisters of Battle The Chamber Militant of the Emperor’s Holy Inquisition. Limited in numbers but incredibly powerful, the Sisters of Battle are second only to the Space Marines in terms of sheer fighting prowess. Ranging from the Sisters Repentia with their devastating ceremonial eviscerators to the awe-inspiring Penitent Engine, the Sisters of Battle are truly a force to be feared. Dark Eldar Twisted and corrupt cousins of the Eldar, these terrifying raiders from the furthest reaches of the Webway are feared and hated by all. Their incredible speed, reliance on close quarter combat and stunning and poisoning abilities allows them to quickly strike an enemy and be gone before reinforcements can arrive. Devastating air attacks Strategic warfare in the 41st Millennium reaches new heights as each army gains air units to rain death from the skies. Brutal domination Wage war across the entire solar system as the metagame map introduced in Dark Crusade is expanded to an interplanetary scale. Liberate, enslave, or destroy entire worlds as you unleash your armies’ fury across the galaxy. Players must now strive to conquer an entire solar system with multiple planets and moons to be conquered. In total 34 maps are available to the player. Enhanced customization Customize your hero’s weapons, items and abilities as he grows in power and personalize your army’s insignias, colors, banners and names. Earn and unlock achievements and medals to showcase your superiority online. Jagged Alliance: Back In Action - Shades of Red