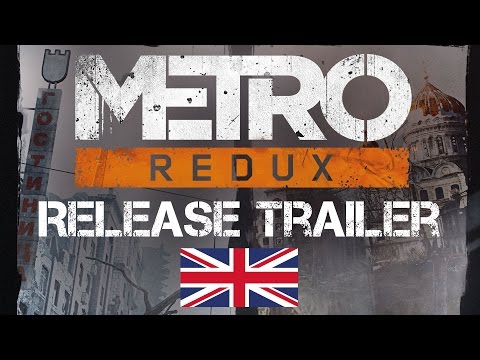 Before buying Metro 2033: Redux you probably want to know what is the difference between Redux and the original version of Metro 2033. Within the context of a plot, we still are playing the same FPS game based on a novel by Dmitry Glukhovsky. You play the role of a protagonist a young man known as Artyom. Artyom is living in the post-apocalyptic Russia in the year 2033. After the apocalypse, Earth is basically inhabitable and survivors are living in the Moscow's metro system.There are currently 40 000 people living in the metro system but the place cannot be considered, a safe heaven. People are dying, suffering from shortage of food and water but it is far from the worse thing that happened. There is a new species of mutants known as the Dark Ones.They were able to find the entrance to the metro and started to attack humans. Artyom with a few other Rangers have to go on the surface in order to find a way to protect their people. The game was changed though in the context of both mechanics and gameplay itself. The entire Metro 2033 was rebuild with the use of the Metro: Last Light engine. In other words, both games look the same and mechanics which you might know from the Last Light are now available in the Metro 2033. For example you are able to wipe your mask. Weapon customization is finally available in Metro 2033, as well as silent takedowns.GameplayFurthermore, a few weapons from the Last Light and DLC's were added to this game. Some locations were also modified and expanded. Which one? Well it is up to you to find. However, the best part of it is the fact that you can choose between two modes: survival and Spartan. The first one is similar to Metro 2033 with limited resources, forcing you to plan each step. Spartan on the other hand, makes the game look like Metro: Last Light. Filled with action and destruction of your enemies.Hence, it is up to you which gameplay style you are going to choose. As it can be seen, even people who already played in the original version of Metro 2033 are going to find something new in this game. We can tell you this much, visit catacombs to see what we mean.Characters in gameOne of the most important elements of the metro franchise are characters. There so many people you are going to meet. First there is Artyom who was born not to long before the apocalypse. Hence, he knows nothing about the normal world and living on the surface.However, due to a crazy coincidence he is now considered a chosen one who is supposed to save the humanity. Then there is Eugine who is actually a secondary character. He is the best friend of Artyom and is constantly insulting him (in a friendly manner). When Eugine is finally killed by Dark Ones, Artyom finally decides to take the matter in his own hands.Key featuresImmerse yourself in the Moscow Metro - witness one of the most atmospheric worlds in gaming brought to life with stunning next-gen visuals at 60FPS Brave the horrors of the Russian apocalypse - equip your gasmask and an arsenal of hand-made weaponry as you face the threat of deadly mutants, human foes, and the terrifying environment itselfRebuilt and Remastered for next-gen - this is no mere "HD port." Metro 2033 has been rebuilt in the vastly improved Last Light engine and gameplay framework, to create the definitive version of the cult classic that fans and newcomers alike can enjoyTwo unique Play Styles : "Spartan" and "Survival" - approach the game as a slow-burn Survival Horror, or tackle it with the combat skills of a Spartan Ranger in these two unique modesThe legendary Ranger Mode returns - dare you play the fearsome Ranger Mode? No HUD, UI, deadlier combat and limited resources combine to create the ultimate immersive experience